This is a weekly meme hosted by the girls over at The Broke and Bookish.

This week: Top Ten Series I'd Like to Start

1) The Sabriel Trilogy by Garth Nix-God, this one has been sitting on my shelf FOREVER because I got it as a birthday gift. I just keep forgetting I have it...My resolution this year to at least read the first book. 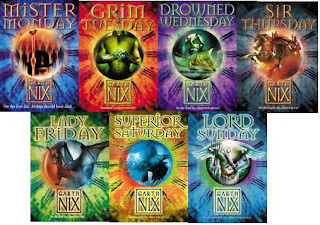 2) The Keys to the Kingdom series by Garth Nix-Yes, another Nix series. I've heard such good things about this one. I just can never find the first book. Or when I do, I already have a huge tbr pile and I have to put it aside while I get those books read and then I forget about it.

3) Enclave series by Ann Aguirre-I've just heard so many mixed reviews about this one that I've sort of put it off.

6) Ghost Hunter Mystery series by Victoria Laurie-These sound so much fun! I'll get to it this year eventually.

7) Peeps series by Scott Westerfield-The only series by him I haven't tried out yet.

8) Green Rider series by Kristen Britain-I get recced this so often whenever I say I'm a Tamora Pierce fan. I'll get to them. Eventually.

9) The Dark Tower series by Stephen King-I know, I know, it's sacrilege that I call myself a fantasy fan and I haven't read these yet. I'll probably try them out after I finish Game of Thrones. So you know, next year.

10) Black London series by Caitlin Kittredge-I adore Kittredge's YA trilogy, The Iron Codex which is ending this year. Which means I'll have to start reading her adult books to tide me over till her next project and this one and her Nocturne series look really awesome.