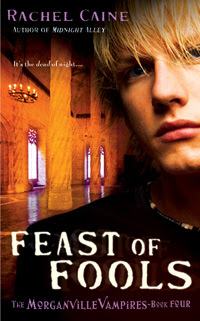 TITLE: Feast of Fools
Book 4 in the Morganville Vampires series
AUTHOR: Rachel Caine
PUBLISHED: 2008
CATEGORY: Young adult
GENRE: vampires, urban fantasy
PREMISE: Claire and co. are back dealing with the usual drama and vampires of Morganville.
MY REVIEW: I know in the last book's review for this series I said I was going to try and give it till book six. Well...I'm taking that back because after this book there's no way I'm going to make it till book six. Look, I stand by what I said: I understand why these are popular. They have a lot going on in them, Caine is very clever in leaving every book at a cliff hanger, and they are very nice quick time-wasting reads that don't take a lot of concentration. Plus, there are some genuine funny moments.
However, they are REPETITIVE. Like unbelievably repetitive. You thought House of Night was bad with the going no where plot? This series has started to follow the same idea but with less annoying characters. However, rather decent characters don't really help it because Caine is so focused on getting the plot from point A to point Z that she kind of leaves character developement by the wayside. As a result, these characters remain the same and that's kind of not good because there needs to be developement. Particularly in the main foursome. Plus, there are a LOT of gaping plot holes the biggest one being: why don't these humans just move out of Morganville? It would literally solve all their problems. Also, why don't the college kids warn incoming students about it? I mean, they literally don't mention it during visits? Or do their best to persuade people not to come in? I mean the whole set up makes very little sense to me because my mind keeps coming up with ways to get around the obstacles that Caine half-hazardly puts up in these books and that's...not very good.
So again, not a horrible series. I understand the popularity but I've literally just lost all interest in this series. Mostly because I've figured out the formula Caine follows for each book: intro of all the characters with roommate scenes galore, maybe some scenes with Claire getting picked on by Monica (who I still think is over the top and want someone to smack her, what happened to her in Book 2 was not enough), some sort of meeting with Amelie or some other similar vampire big bad, angsty scene with Michael (and for bonus points, Eve), some scenes in between with Claire and Shane to fill the romance quota, some sort of big event involving vamps, usually ends badly and with Claire making stupid decisions (for a smart girl, she sure is dumb sometimes) and then cue cliffhanger. I've just literally have gotten to the point where I don't care anymore. So sorry, Morganville, I'm breaking up with you. Maybe her adult books are better. I'll try looking into those.
WHO SHOULD READ: Those who have read and liked the first 3 books, vampire fans, Twilight fans
MY RATING: Three out of Five stakes

FOR THE FOLLOWING CHALLENGES:
12 by 12 in November
One Hundred Plus Books
YA Challenge
Support Your Local Library
Posted by fantasylover12001 at 8:40 PM

Labels: 12 by 12 in November, one hundred plus books, published in 2008, series, support your local library, urban fantasy, vampires, YA challenge, young adult