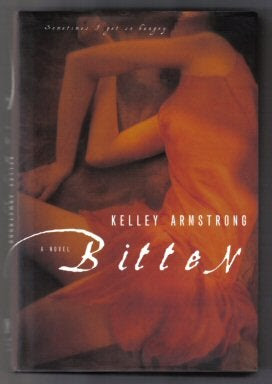 TITLE: Bitten
Book 1 in the Women of the Otherworld series
AUTHOR: Kelley Armstrong
PUBLISHED: 2001
CATEGORY: adult
GENRE: urban fantasy, werewolves, romance
PREMISE: Elena has been trying to leave her life as a pack member behind. She's got a boyfriend, a great job and is perfectly happy. But then the pack calls with urgent news and that means going back to face them and the man she tried to forget...
MY REVIEW: This is actually fairly different from Darkest Powers which is the first of Armstrong's books I read. I'm trying to refrain from comparing the two because this was Armstrong's first book whereas Darkest Powers was written years later and the thing is...I can tell it's her first book.
Whereas in Darkest Powers the writing was more subtle, the plot more complicated, and the ending not totally obvious, this book...there's kind of a lot of telling not showing and I saw the ending coming from a mile away. Now Armstrong does still have strong characters with complicated relationships. I liked how she went and took time to give us the bigger picture on pack relationships and fleshed out this world of hers.
I'm just saying when you compare this book to her later works...you can see that it's actually not her strongest work and obvious that she probably grew better as a writer over time. So at least she got better. I also will say this was interesting in some parts and it helped that it had Armstrong's humor in it as well. So overall it's a solid book, it's just that I know she's done better then this.
WHO SHOULD READ: Kelley Armstrong fans, True Blood fans (this book is so similar to Sookie Stackhouse I half expected Bill to turn up), urban fantasy fans
MY RATING: Three and a half out of Five

FOR THE FOLLOWING CHALLENGES:
One Hundred Plus Books
12 by 12 in July
Support Your Local Library
First in a Series
Posted by fantasylover12001 at 10:02 AM

Labels: 12 by 12 in July, adult, first in a series, one hundred plus books, strong females, support your local library, urban fantasy, werewolves